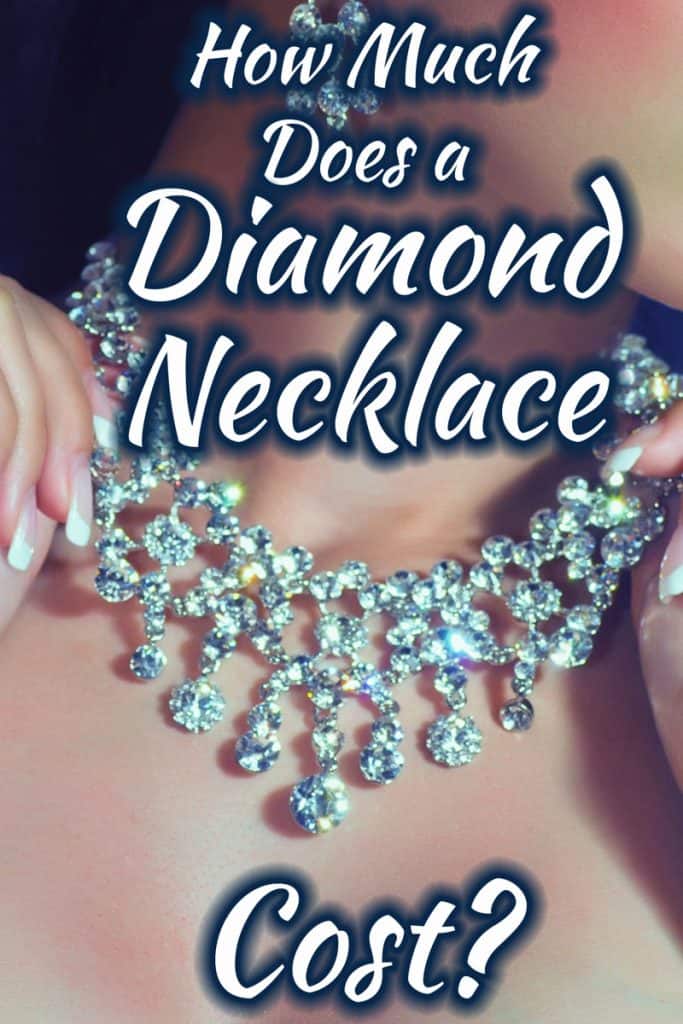 If you're interested in investing in a diamond necklace, you might wonder how much they typically cost. If you understand the price, you can rest assured that you're getting the best value for your money. That's why we've collected answers to some of the most common questions surrounding the cost of diamond necklaces in this post.

The cost of diamond necklaces can range greatly depending on the diamond quality, carat weight, and the number of diamonds in the piece. A necklace with a single tiny diamond typically costs at least $250, while a designer necklace set with multiple diamonds can cost upwards of $30,000. However, you can expect to spend at least $1,500 on a good-quality pendant or tennis necklace.

What Elements Affect a Diamond's Value?

In general, value is decided by the rarity of a diamond. Elements that affect rarity, and therefore value, include:

Carats is a very precise way of measuring the weight of a diamond. Since large diamonds are rarer, diamonds with a high carat weight are more valuable. However, just because a diamond is a small carat does not mean it's poor quality. Even a very small carat diamond can be free from blemishes and cut to sparkle and shine.

Clarity refers to the number of "inclusions" (internal marks) and "blemishes" (external marks) that a diamond contains. This is measured using a rating scale. The highest-quality diamonds are rated "Flawless", meaning no inclusions or blemishes are visible up to 10x magnification. "Included 3" is at the other end of the scale, which refers to inclusions large enough to affect the transparency of the diamond.

Since diamonds are created through immense pressure underground that can easily cause internal and external damage, "Flawless" diamonds are very rare. This makes them extremely valuable.

To sparkle brilliantly, diamonds have to be cut with skill. The cut surfaces of a diamond are called "facets", and the goal is for these facets to reflect as much light as possible. This requires the work of a skilled craftsperson who can gauge the best way to cut each individual diamond.

For this reason, it's important to buy your diamond necklace from a reputable source. Even the most beautiful diamond can be dulled if it's cut incorrectly.

The most valuable white diamonds are colorless. Diamonds with a hint of yellow are more common and considered less valuable. However, "fancy-color" diamonds are occasionally discovered, and their rarity makes them very valuable. They can be found in colors like blue, red, or green.

What is the Most Expensive Diamond Necklace in the World?

Currently, the world's most expensive diamond necklace is called A Heritage in Bloom. In the mid-2000s, a Hong Kong jewelry company called Chow Tai Fook bought a 507.55-carat diamond called the Cullinan Heritage. They commissioned famous Chinese jeweler Wallace Chan to use it to create a necklace.

A Heritage in Bloom contains 11,551 gemstones including white and pink diamonds, white mutton fat jades, and jadeites. It uses symbols of love and good fortune drawn from Chinese culture, including bats and butterflies. The necklace can even be worn in 27 different ways as a nod to the importance of the number 27 in China.

One of the necklace's most unique features is that each of the white diamonds was cut from the Cullinan Heritage. This diamond was discovered in Pretoria, South Africa and is the largest ever found. It adds greatly to the value of the necklace, as it is considered to have a grade of IF - "Internally Flawless". This means that even if the exterior of the diamond received nicks or scratches, the interior is flawless even under a microscope. The 104 carats main stone of the necklace alone is worth $35 million, while the necklace itself is priced at $200 million.

How Much is The Heart of the Ocean Diamond Worth?

This 45.52-carat blue diamond, discovered in India, has been famous for centuries. A French merchant sold it to King Louis XIV in 1668. After disappearing during the French Revolution, it reappeared in London in 1812. It eventually ended up in the possession of a collector named Henry Phillip Hope, from whom it received its name.

After passing through the hands of many owners, the Hope Diamond was donated to the Smithsonian Institute in 1958. The Hope Diamond is considered priceless because it is impossible to replace. However, it's been valued at $350 million.

Heart of the Ocean replicas

Two high-quality replicas of the famous necklace were created since the making of Titanic. The first was from a heart-shaped 171-carat sapphire surrounded by 103 white diamonds. It was worn by singer Celine Dion at the 1998 Academy Awards and eventually auctioned for $2.2 million.

The second was created by the jeweler Harry Winston from a 15-carat blue diamond and is valued at over $20 million. This necklace was worn to the 1998 Academy Awards by actress Gloria Stuart, who played the elderly Rose in Titanic.

In Titanic, the Heart of the Ocean is described as similar to the Hope Diamond, but larger. This means that if the Heart of the Ocean actually existed, it would probably be worth around $400 million today. It's possible that it could sell for even more than that at an auction since it would also hold great historical significance.

Do Diamond Necklaces Increase In Value Over Time?

In general, the value of diamond necklaces increases over time. However, the speed at which this happens depends on multiple factors. Among others, these factors include supply and demand, the rarity of the diamond, and damage to the diamond. Very rare diamonds increase in value most quickly. These are diamonds with little to no visible flaws, perfect cuts, or rare colors.

If you want to protect the value of your diamond necklace, it's important to care for it properly. For example, you can:

How Much Does a Diamond Tennis Necklace Cost?

A tennis necklace is a necklace made from small diamonds linked together to form one continuous chain. Since it involves many diamonds, this type of necklace is typically expensive. The exact price depends on the carat and quality of the diamonds. With that being said, these necklaces can cost as little $950 or as much as $50,000.

You can see an example of a tennis necklace on Amazon here.

How Much Does a Diamond Pendant Necklace Cost?

A diamond pendant necklace is a necklace with one main diamond that hangs from a chain by a loop. This diamond is either solo or surrounded by smaller diamonds or other gemstones. A solo diamond is called a solitaire pendant.

The price of this type of necklace varies depending on multiple factors. These include the carat and quality of the diamonds, the type of metal in the setting, and the number of diamonds. A small 1/4 carat pendant can cost as little as $300, while a larger pendant with multiple diamonds can cost as much as $10,000.

Check out this example of a pendant necklace on Amazon.

How To Clean Tourmaline Jewelry

How To Best Store Pandora Jewelry