Weddings are full of traditions that have been passed down through generations. One major custom is the exchanging of rings between the bride and groom during the ceremony. The wedding ring is given by the groom on the day of the wedding and should be worn below the engagement ring on the same finger. What should the bride do with the engagement ring during the wedding to ensure the groom can put the ring on her finger? Don't worry: we've researched this topic thoroughly and have put together this guide to help you think about what to do with your engagement ring during the ceremony.

There are so many details you have to figure out leading up to the wedding, so this is one that might fall by the wayside. Keep reading for more details on the different options and answer some other questions about engagement rings. 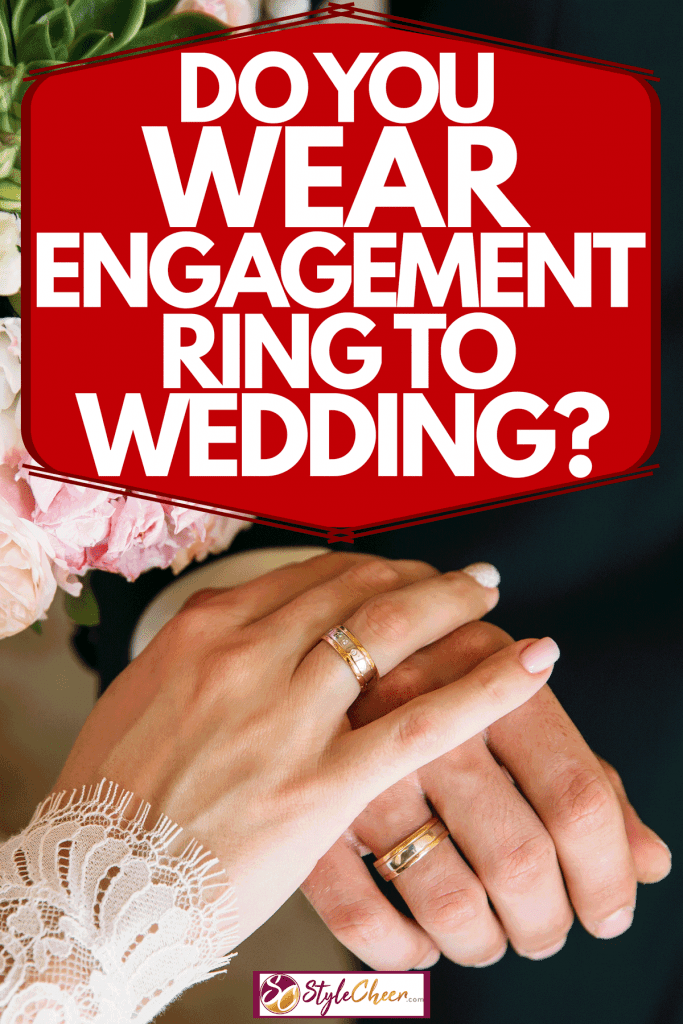 Do You Wear Your Engagement Ring When You Walk Down The Aisle?

These traditions originated in ancient Greek and Roman cultures, where the groom's family was responsible for providing a dowry for the bride. The ring, which was often intricate and valuable, showed the bride what she was worth. Throughout medieval times, wedding rings began to demonstrate a commitment to each other.

Wear it on the right-hand ring finger

Make sure it fits on your right-hand ring finger. If it doesn't, consider wearing it on a different finger on your right hand. The idea is to get it out of the way of the wedding band while still getting to show it off during the ceremony.

Don't wear it during the ceremony

If you don't feel the need to show off the engagement ring during the wedding, it's acceptable to leave it off. Ask a trusted friend or family member to hold onto it or put it in a safe location. This option also ensures that your wedding band will be the star of the show and won't be overshadowed by your engagement ring. It's your party, do whatever you'd like!

Wear it on the left ring finger

Are you more interested in practicality than tradition? Then maybe all of this talk about how things "should" be done doesn't interest you. If this is the case, feel free to break these traditions by wearing the engagement ring on the left ring finger during the ceremony.

The groom can put the wedding band on the left ring finger on top of the engagement ring. Then, you can switch the order of the rings after the ceremony. This is a great option if your engagement ring doesn't fit on your right-hand ring finger.

Want to make sure you're spending the right amount of money on a ring? Read this article for details: How Much Should a Wedding Band Ring Cost?

What Happens To An Engagement Ring After A Wedding?

Most wives continue to wear their engagement ring after the wedding in the same position as described above: the wedding band first, followed by the engagement ring. In fact, many people solder -- basically fuse -- the two rings together. This keeps the rings from sliding around and grating against each other. It also makes it more comfortable to wear both rings since they won't constantly be moving.

Trying to pick out the perfect wedding ring? Check out this article for a helpful guide to all the options: 12 Types of Wedding Bands.

Do Guys Wear An Engagement Ring?

Historically, guys don't wear an engagement ring. There are several reasons for that, most of which are related to the traditional nature of proposing. Throughout most of Western history, the male has proposed marriage to the bride, who can then accept or deny the proposal. This commitment to marriage is signified with a ring. Since the man typically proposes, the bride doesn't have anything to give him.

Your wedding should be all about what makes you happy, including what you do with your engagement ring! If you're concerned with following traditions, wear your engagement ring on your right hand, then put it on the left ring finger after the ceremony.

Don't care so much about doing it the customary way? Then leave the engagement ring off for the wedding, or keep it on the left hand and switch the order later. It's up to you! Afterward, consider having the rings soldered together if you plan on wearing both of them on the same finger.

Hopefully, this guide has answered your questions about what to do with your engagement ring during the wedding. Good luck, and happy wedding day!