Tourmaline, one of October's birthstones, is a semi-precious gemstone that looks truly captivating. But when you look at the stone, you may wonder, "Does tourmaline change color?" For your convenience, we've brought you the answer.

Tourmaline appears to change color depending on how much light is shining through it or onto it. It only takes a slight change in the composition for the colors to change completely. 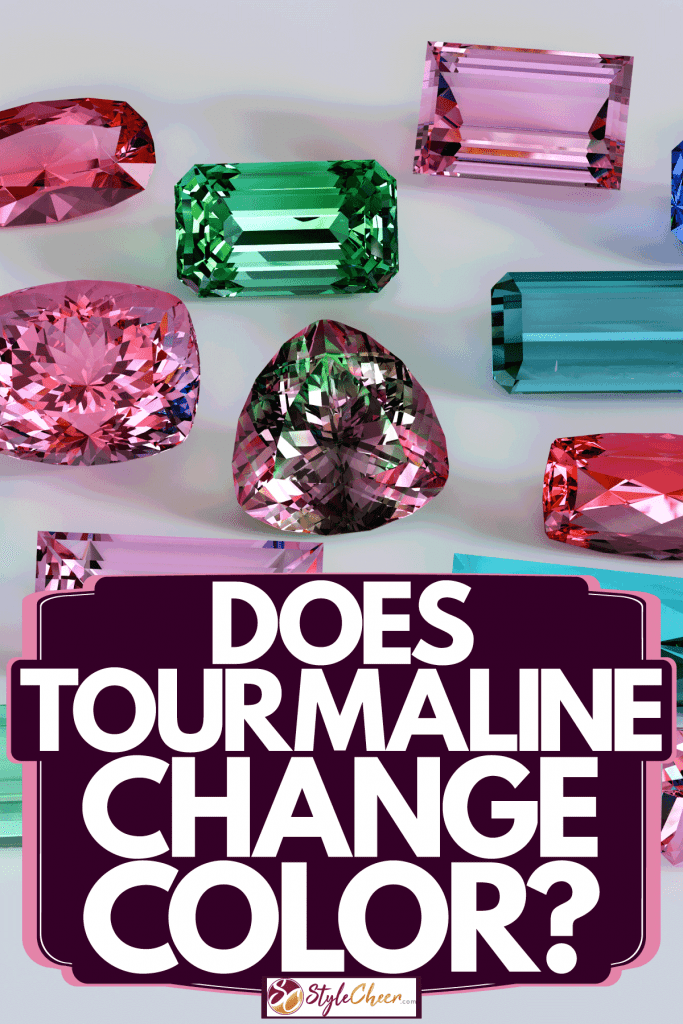 What You Need To Know About Tourmaline

Tourmaline is the most colorful gemstone of them all. The color is dependent on lighting as well as the metal ions within its structure. Tourmaline is a mineral known as a crystalline boron silicate. It is formed by severe hydrothermal activity.

A few other little known facts include:

Tourmaline is said to be used for grounding purposes. It brings with it healing, wisdom, and friendship. People believe tourmaline can be used to help one feel more stable.

If you rub your genuine tourmaline crystal, it will become electrically charged. When you rub, heat, or cool tourmaline, it generates one positive end, and the opposite end will be negative.

Click here to see this tourmaline bracelet on Amazon.

An amazing fact about this particular gemstone is that you can find tourmaline all over the world. There are several tourmaline mines in San Diego, California which were up and running in the early 1900s. Tourmaline can also be found in Brazil and all across Africa.

Tourmaline can be found in a wide variety of colors. You will find tourmaline that is red, pink, orange, yellow, green, blue, purple, white, brown, grey, or black. Favorites in this variety are tourmaline having multiple colors present in one stone. 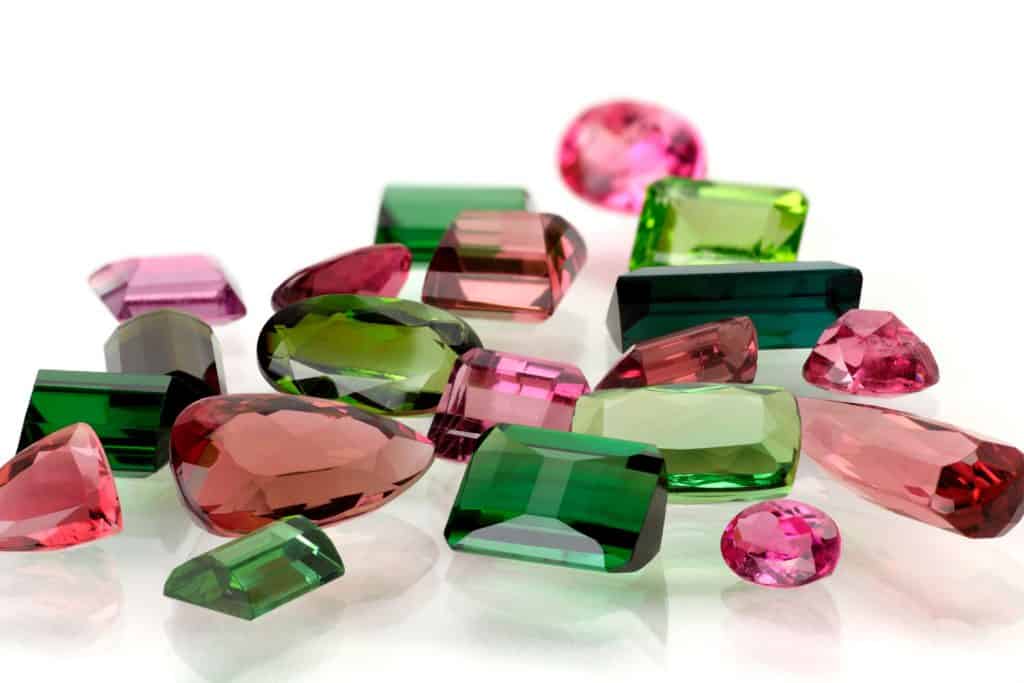 There are several ways that jewelers can alter the color, clarity, and durability of certain gems. Tourmaline can be altered.

Tourmaline from the Umba Valley in Tanzania goes from green to red as light shines through it. This is known as the Usambara effect.

Why is my black tourmaline changing colors?

Black tourmaline is the most common form of tourmaline and is known as schorl. It offers many health benefits, such as promoting a healthy mood and the improvement of circulation. Black tourmaline also reduces bloating, anxiety, and stress.

Tourmaline is considered to be a stone of protection. The most powerful form of tourmaline is green. Green tourmaline is said to be the perfect crystal for boosting strength, bravery, and stamina.

Many people like to wear tourmaline in their jewelry. You can find tourmaline in necklaces, bracelets, earrings, and rings. Tourmaline is so durable that it is appropriate for everyday wear.

How do you know if a tourmaline is real?

There are a few more ways to tell if your tourmaline is real. Tourmaline has a visual diversity to it. This fact can make it more difficult to determine whether or not yours is genuine. 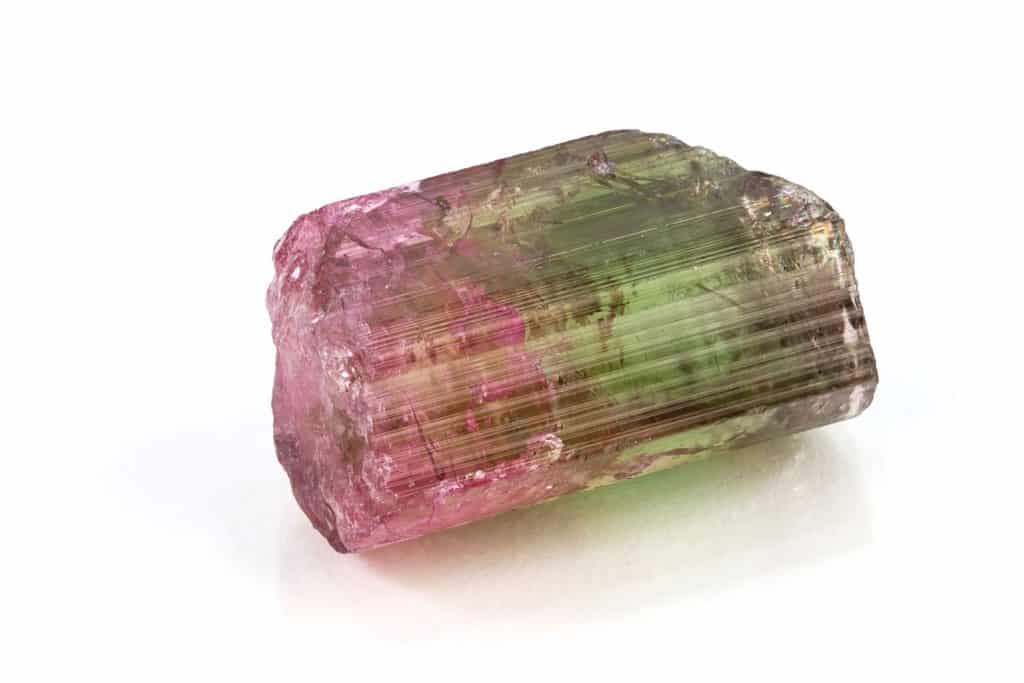 A true tourmaline should have prismatic crystals within it. Prismatic crystals have elongated, flat, and defined faces. Tourmaline has rounded edges which causes each face to be smooth and faint instead of sharp.

Additional Ways to Find Out if Your Tourmaline is Genuine

Because tourmaline is created by intense hydrothermal activity, you should be able to see striations along the surface with your naked eye. These thin grooved lines run lengthwise across the gemstone. If your tourmaline is lighter in color or small, you may want to pull out a magnifying glass to get a closer look.

Color variations do not overlap

As for colorful tourmaline, the colors are individual rather than layered. For example, your tourmaline may have a section of pink, a section of green, and a section of yellow. They do not overlap in the way you see colors in opal or pyrite.

Click here to see this black tourmaline on Amazon

How can you tell if pink tourmaline is real?

Pink tourmaline does not change color permanently. It should appear to change color when it is under artificial light. This is how you can tell if the gemstone is fake or genuine.

Pink tourmaline comes in many shades of pink. These shades include hot pink, pale pink, and reddish pink. There is a certain shade of pink tourmaline that looks very similar to rubies.

What is the rarest color of tourmaline?

The rarest color tourmaline is blue-green. It is the most expensive tourmaline and is included in the Paraiba variety. It is known as Paraiba because it was discovered for the first time in the Brazilian state of Paraiba.

Tourmalines that are the Paraiba variety can be so expensive that they cost $10,000 per carat. The best color of tourmaline is bright. There are pure tones of red and a variety of blues and greens. These colors are valued the most.

Green tourmaline is known as verdelite. It is related to the heart chakra. This facilitates unconditional love and joy.

The heart chakra is the fourth chakra. It is responsible for compassion, empathy, and forgiveness. This is important for overcoming jealousy, and it promotes stamina.

Brown tourmaline is known as dravite. This is the root chakra. It can help you overcome bad habits and help you to conquer your weaknesses.

Since tourmaline is used for the purpose of grounding, this particular color of tourmaline is best for that purpose. Tourmaline is known to be soothing and promotes meditation.

The Difference Between an Epidote and a Tourmaline

One stone that is mistaken for tourmaline is epidote. It is yellow-green, which is similar to certain tourmaline. However, epidote does not have a hexagonal or triangular cross-section like tourmaline.

Tourmaline does not technically change color. It does appear to, though. This process depends on how much light is let through the tourmaline.

Some tourmaline is a combination of colors. You can find out whether or not tourmaline is genuine by examining it under artificial light. It should have striations along the surface, a prismatic pattern, and a triangular or hexagonal cross-section.

Before you go, check out the following links about tourmaline and birthstones:

How To Clean Tourmaline Jewelry

Which Hand Do You Wear A Birthstone Ring On?

How To Clean Birthstone Ring [4 Steps]

How To Clean A Sapphire Ring [A Complete Guide]

Which Ankle should I Wear an Anklet on?

Do Rings Fit Tighter in Summer?