Skip to content
Celebrating a significant marriage anniversary might mean shopping for new rings. Anniversary bands are a common present for milestone years, similar to your original wedding band but typically fancier. Still, you may not be eager to have it replace your old, traditional band. Does this go instead of the old ring, or in addition? Or maybe it goes on the other hand altogether -  what finger does an anniversary band go on, anyway? We dug into this very question so you can make the right decision for your anniversary band!
Jewelers all agree, there are no hard and fast rules for anniversary bands. As these are meant to celebrate a special occasion, simply do what makes you happiest. Most people choose to wear their anniversary band on the same finger as their wedding ring. However, opting to wear it on the right hand and leaving the left ring finger free for your original engagement ring/wedding band is not unheard of.
But how soon can you get an anniversary band? Does it replace the old band, or is it an addition to the other rings? Continue reading for answers to these questions, and more. 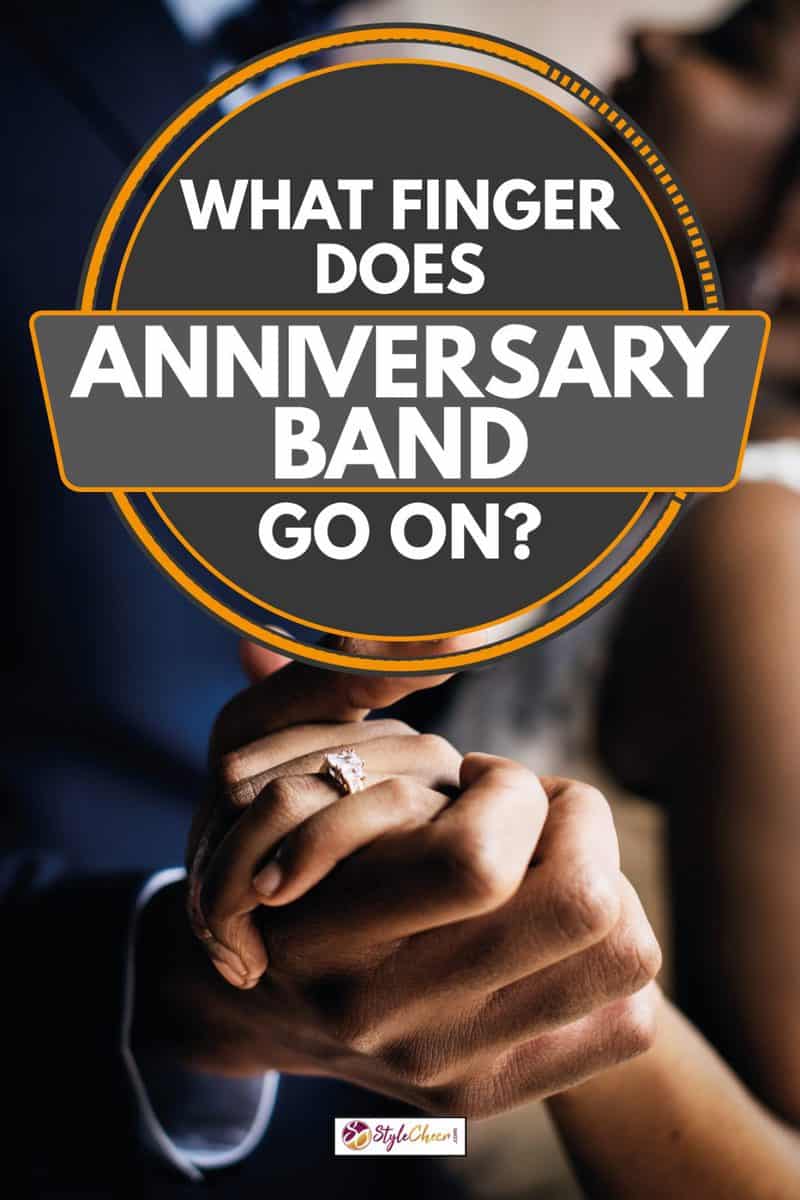 What Is An Anniversary Band?

Ultimately, go with whatever makes you comfortable - if you feel strongly about not changing your wedding band, then don't. If you feel that your left ring finger should be only for wedding rings, then use your other hand for the anniversary band. An anniversary band is a gift to celebrate marriage. It shouldn't be a source of discomfort or distress.

If your wedding band is rather simple or plain (or was bought at a time were finances were much less than they are today), you might gladly use an anniversary band to update your look. You can find something more stylish and modern to replace the old, basic band. Or, you can update the original band. For example, you can add more or bigger stones while keeping the same band. 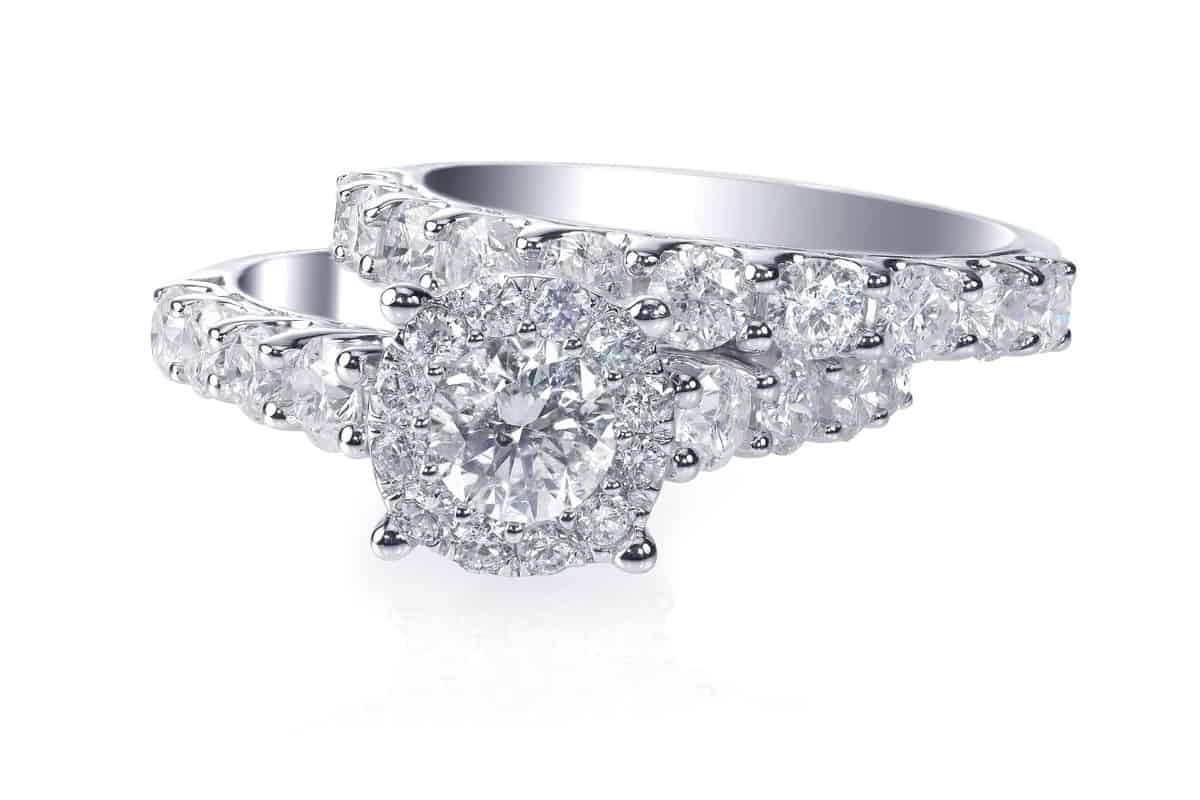 In Addition To The Wedding and Engagement Ring

On the other hand, if you're attached to your wedding band, you may have no intention of removing it from your left hand - ever. If this is the case, perhaps you would prefer an anniversary band that works with both the engagement and wedding band. You can sandwich all three of them together.

Separate From The Wedding And Engagement Ring

The last alternative is to leave the wedding band and engagement ring unchanged. Instead, wear the anniversary band on the right hand or another finger. There are really no hard rules here, and it is entirely a matter of personal choice. Most people will feel, almost instinctively, that one of those options is the right one for them. Just note that jewelers typically advise picking a ring that matches the others in material and style. This means that you can use any combination in any way you want, both now and in the future.

Does The Husband Get An Anniversary Band?

The same rule as above applies here - this is a gift between you and your husband. If the two of you are happy, no one else much cares. If your husband's original wedding band wasn't quite what he'd pick nowadays, maybe new anniversary bands for both of you are in order.

On the other hand, some men barely tolerate one piece of jewelry. If his old wedding ring makes him happy and he has no intention of adding another one, then it's perfectly fine if both partners don't get an anniversary band. For the record, it's more common for an anniversary band to be a gift for one partner only. 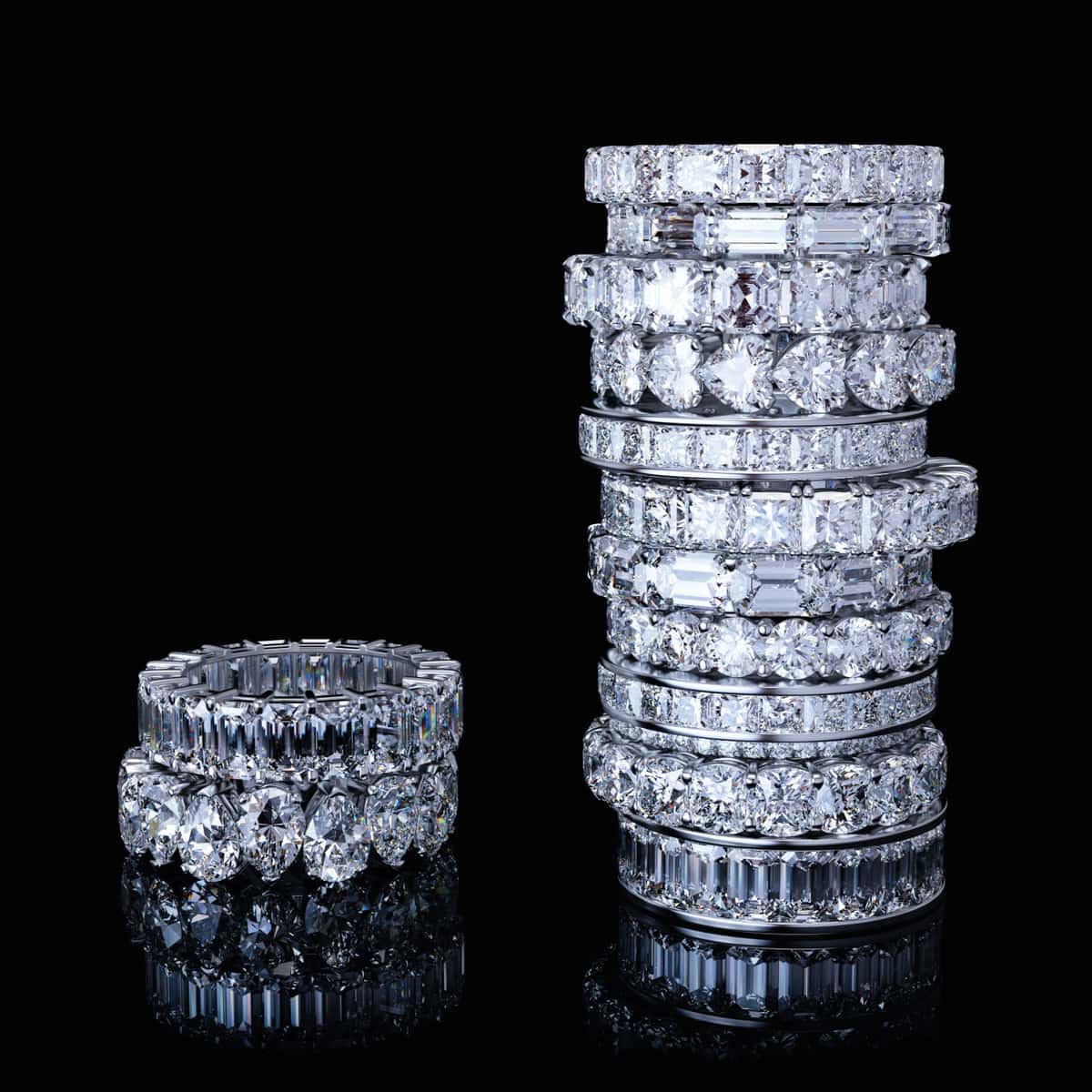 Typically, people get anniversary bands at milestone landmarks in a marriage. For example, the ten or twenty year anniversary. Often, it's as simple as being a year when a "landmark" and available finances line up, through providence.

Some people follow the clock of their own private relationship. If you separated for a period, the anniversary that you re-commit to your marriage might be a meaningful time for a new ring. Or, perhaps, the year that your first child is born feels like the most significant year in your marriage.

This isn't a standardized test - there's no right answer. Even if, according to the calendar, this isn't a traditionally significant anniversary, don't let that deter you when the moment seems right. You don't need to wait three years for an anniversary that ends in -0.

What Order Do Rings Go On Wedding Finger?

It's important to begin with a note - there are cultural differences in how people wear their wedding rings. Traditionally, the long history of using the left-hand ring finger is still popular in countries such as the United States, UK, Canada, Mexico, and many parts of Asia.

However, in Eastern European countries such as Russia or Poland, people tend to use their right hand. And in Brazil, it's common to wear the rings during the engagement period on one hand. After the ceremony, the rings switch hands. This indicates that you are now married!

In western culture, the style is wedding ring first. Then, wear the engagement ring on top. However, in modern times, the rules for jewelry are more relaxed than ever. Some people have rings that simply fit better when worn the other way. Some people don't like stacked jewelry at all. They choose to wear the engagement ring on the right hand instead. Still, most of the time, you'll find that people stick to the old traditions - wedding ring first. 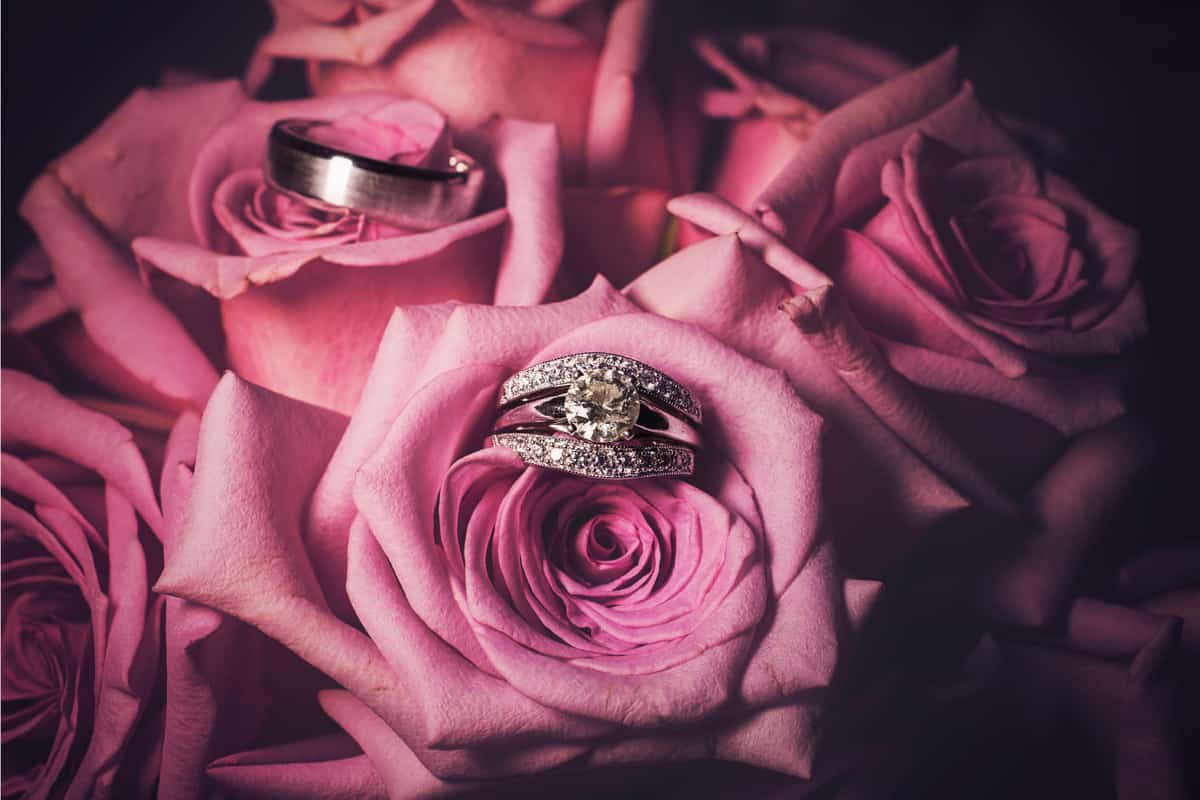 Is An Anniversary Band A Diamond Ring?

Anniversary bands are usually thought of as being diamond rings. Since most engagement rings are diamond, as a result, diamonds are common for anniversary bands as well. Especially if you're trying to pick something that matches your other rings, it just makes sense to stick with the pattern.

But, just because most anniversary rings are diamonds, doesn't mean they have to be. Personal tastes and opinions differ. Some people prefer to do something unique, like a meaningful gemstone ring such as this one:

As the source of diamonds becomes more controversial, some people have made a choice to no longer purchase diamonds. Others simply find another style of ring to be more symbolic or appropriate. Just be sure, whatever you pick, that it will fit well with any other jewelry. If you plan to wear it with your engagement and wedding rings, it should look like it belongs in the set.

Anniversary bands can be worn on the ring finger, with the wedding and engagement rings. It can also be worn as a replacement for an old wedding ring, or it can be worn entirely separately on another finger (or even the other hand). There's no real rule or etiquette stating how or where an anniversary ring must be worn. The most important consideration is that the anniversary ring should coordinate or match any other rings worn together.

If you enjoyed this article, try:

32 Types of Rings You Should Know (Illustrated Guide)

Does Rhodium Plating Wear Off Jewelry?