Jewelry is a popular way to declare love and commitment to another person. When a couple is married, a popular way to display this affection is to purchase an anniversary band. It's a romantic step that can reaffirm the commitment that was made on the wedding day. But is there a particular year that a couple should make this purchase? Anniversary bands are a relatively new phenomenon, so we understand that there might be some confusion around them. Rest assured that we've done the research and have compiled the information in this handy guide. We're excited to help you understand the ins and outs of this piece of jewelry.

You can purchase an anniversary band for your wife any year, though many couples give this give to commemorate a milestone anniversary such as the 5th, 10th, 25th, etc. Other people decide to surprise their wives by giving them a new ring on a random anniversary. There are few rules for anniversary bands, so feel free to do whatever you'd like!

Please keep reading for a description of anniversary bands, how to use them, and answers to other common questions. Here we go! 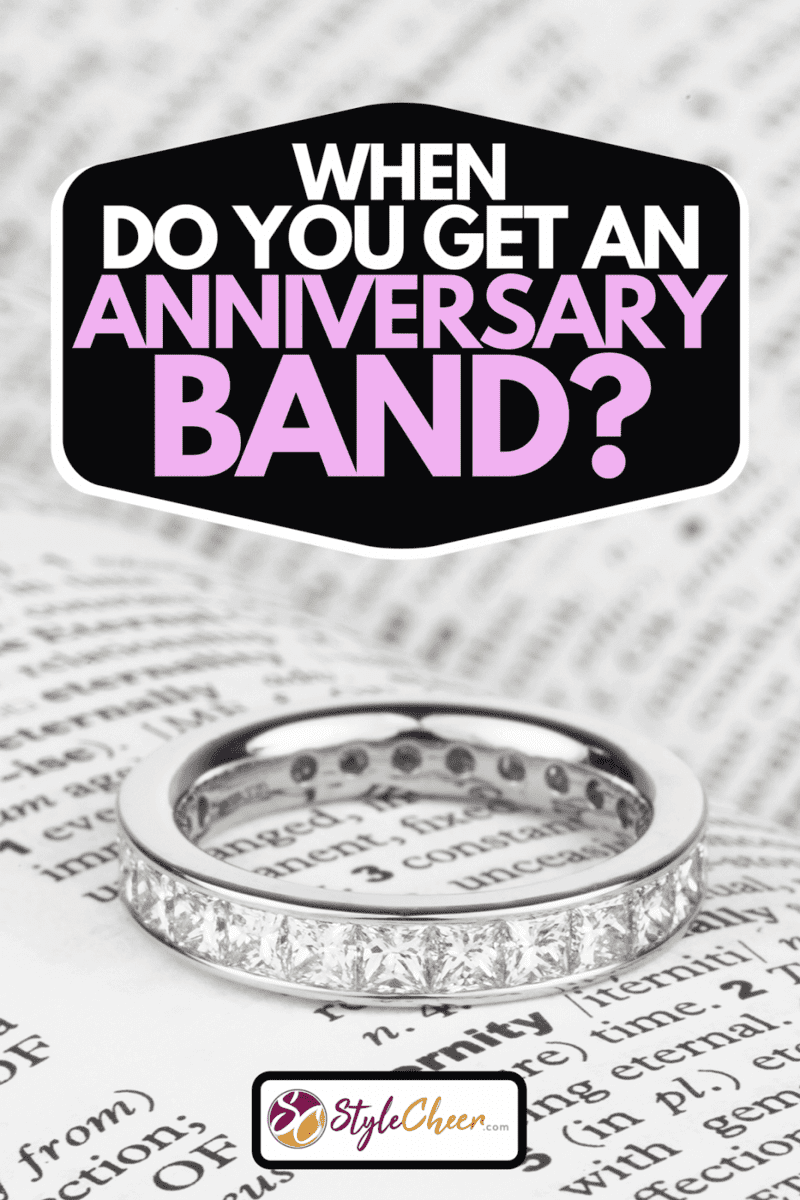 What Is An Anniversary Band?

An anniversary band is a ring that is usually given to a wife on a milestone anniversary, though it can be given on any anniversary. Sometimes the ring is a surprise, but some couples pick out the ring together to make sure it's acceptable for both parties. The anniversary band is less traditional and has fewer "rules" than the engagement and wedding rings.

Most anniversary bands are similar in style to wedding bands and might be a simple gold or silver band like the one below.

Or, an anniversary band might feature a birthstone or a different gem. Some men use this opportunity to upgrade the woman's engagement ring or to supplement it.

How Much Does An Anniversary Band Cost?

Because there are so few rules for anniversary bands, they can cost any amount on the spectrum of rings. If you choose a simple band with few or small gemstones, expect to spend a couple of hundred dollars. The bigger the gems or, the more ornate the setting, the more expensive the band gets. At the top of the line, you can plan to spend up to $10,000.

The ring below is moderately priced. It features two karat diamonds in a five-stone set.

What Is The Difference Between Anniversary And Wedding Bands?

In terms of style, there is often no difference between anniversary and wedding bands. Wedding bands are generally simple bands with three, five, or seven stone setups. They don't have center stones as an engagement ring would. Anniversary bands are often eternity rings or multi-stone rings, which makes them similar to wedding bands.

However, some anniversary bands are solitaire stone set with a center gem of some sort. Depending on what type of ring the couple has picked out, this might make it more ornate than a wedding band. Since there are very few "rules" that anniversary bands must follow, some of them might be vastly different from wedding bands.

Looking for more info on the cost of wedding bands? Check out this article next: How Much Should a Wedding Band Ring Cost?

Does An Anniversary Band Replace A Wedding Band?

What Finger Do You Wear An Anniversary Band On?

Much like the other rules about anniversary bands, the finger that the band is worn on is flexible. It depends mostly on personal comfort and the style of the ring. You can wear the anniversary band on the left ring finger, the left middle finger, or the right ring finger.

If the anniversary ring is more ornate than the wedding set, it should be worn on the opposite hand. This balances out the jewelry and gives each piece its own attention. This is useful for rings that are engagement-like but would clash with the actual engagement band. Keep in mind, however, that any ring on your dominant hand should be durable.

Like the one below, an eternity band is a ring with small gems, often diamonds, all the way around the outside of the ring. It can go on either the left ring finger, the left middle finger, or the right hand. The eternity band should go on the right hand if it's a different gem or metal than the wedding set.

If it's the same as the wedding set, it can be worn on the left hand. Test out the new ring's size and bulkiness: if you put it on the ring finger with the rest of the set, does it feel too obtrusive? If so, put it on a different finger, such as the middle or pointer.

Like the one shown below, a simple band that is the same metal as the rest of the wedding set can be worn on the left ring finger. As with the eternity band, make sure adding a third band to the set doesn't make it too bulky or unwieldy.

How Do You Wear An Anniversary Band With A Wedding Set?

There are so many types of rings; how can you keep them all straight? This article will help: 32 Types of Rings You Should Know (Illustrated Guide)

If you're planning on buying your wife an anniversary band, feel free to do it on any anniversary, no matter how long you've been married. Traditionally, an anniversary band is used to commemorate a major milestone year, but that's unnecessary. An anniversary band can be similar to a wedding band, or it can be completely different. The style of ring and personal preference determine on which finger the ring is worn.

We hope this article has helped you understand anniversary rings better. No matter when you decide to give a ring, make sure it fits your personal style. Good luck!

How To Open A Bangle Bracelet