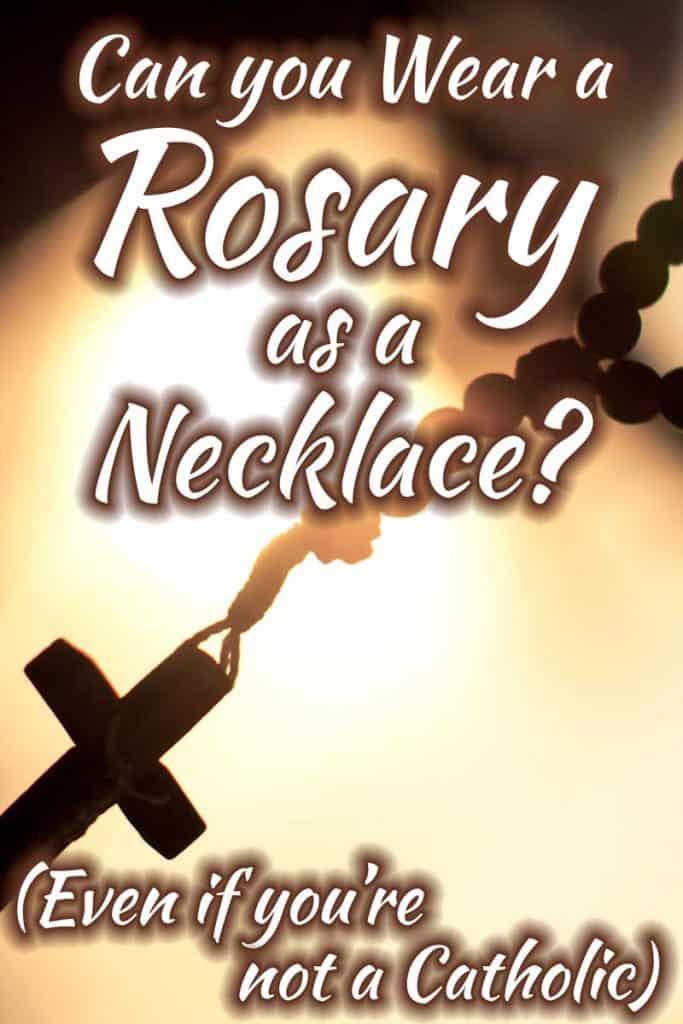 Many rosaries are quite beautiful, and they do often resemble necklaces. But is it appropriate to wear one as such, whether you’re Catholic or not? It’s something of a controversial topic among Catholics, and everyone has their own opinion. We’ve done our research and found the answers you’re looking for!

While some consider wearing these holy beads to be taboo, the practice of wearing the rosary dates far back in the history of Christianity. Generally speaking, if you are Catholic, you may wear the rosary as a necklace if it is worn in an expression of faith. Like many debates defining sin, it all boils down to intent. If you are not Catholic and do not maintain faith attached to the Rosary prayers, it is considered wrong and perhaps even a mockery of these sacred beads.

What is the Purpose of a Rosary?

A Roman Catholic rosary is made up of a series of beads, medals, and a singular crucifix. We start with the crucifix, followed by a large bead, three smaller beads, and another large bead, totaling five beads. These are typically followed by a medal. Then following around the rosary chain are five sets of ten small beads, each separated by one larger bead.

The Rosary prayers are meant to keep memories of specific events and mysteries in history. They are prayers to Jesus through his mother, Mary, reflecting on events in Jesus’s life. A rosary is a useful tool because the Rosary prayers are extensive and repetitive. Having the beads to hold while reciting the prayers helps the user keep track of how many times prayer has been recited, thereby clearing the mind and allowing more focus on the prayer itself.

The Rosary prayers begin with Apostle’s Creed, recited while holding the crucifix. What follows is Our Father prayed on each larger bead, and Hail Mary prayed on each smaller bead. A more elaborate Hail Mary may be prayed on the medal if one is present.

On the rosary, each set of ten beads represents a decade, with one mystery per decade. There are fifteen mysteries total, so to pray the entire Rosary requires praying three times around the rosary chain. Prayers and rosary designs may vary slightly, but the basis stays constant.

History of Wearing the Rosary

Some consider wearing the rosary as an act of vanity, others wear it as a respectful act of religious homage. But brandishing these beads is actually incredibly popular and historically ingrained in certain cultures, particularly Hispanic cultures. One of the earliest records of the rosary as a fashion statement occurred around the 1930s in Los Angeles, among the American-born children of Mexican migrants. Rosary beads were often worn as a cultural symbol, connecting this population to their heritage. The style evolved over the decades, eventually presenting itself in one of three primary ways – as the original connection to one’s heritage, as a symbol of devotion and protection, or as a symbol of gang affiliation.

As time progressed into the 70s, rosaries continued to flourish within the gang and goth cultures. Members of these groups were often drawn to symbols of sacredness throughout history, using these symbols to craft their outward appearance. These groups began the normalization of wearing the rosary outside of religious devotion.

The final straw taking this trend into the mainstream is usually credited to Madonna. Madonna wore rosaries in the “Like a Virgin” video released in 1984. This video, this moment was a disruption of sorts, as a celebrity of her status had never placed rosaries into mainstream media before. She actively presented the rosary as a fashion statement and the ball kept rolling from there.

Today, the rosary continues to be worn in various circles, sometimes as fashion, sometimes representing faith, sometimes both.

What Does a Black Rosary Mean?

As a liturgical color, black represents death and mourning. However, our research shows that the color of rosary beads is insignificant. They come in a variety of colors, shapes, sizes, and materials, and whatever you choose falls to personal preference. It has no impact on the rosary’s purpose.

What Are Some Fashion Alternatives to Wearing a Rosary?

If you are not Catholic and/or enjoy wearing the rosary solely as a fashion statement, but wish to respect the Catholic faith, we suggest looking at some alternatives! We’ve discussed the rosaries are made up of beads, possibly medals, and a crucifix. We’ve broken down these parts and found some alternatives embracing one or two of these elements, to give you the rosary look without the exact design.

If you favor the look of the crucifix:

Consider a crucifix alone, whether the chain is beaded or otherwise. This lovely necklace features a simple engraved wooden crucifix and a chain of polished wood beads. This option is closest in design to a real rosary, only lacking a medal and the division of sets of ten beads by larger beads. Check it out on Amazon here!

If you’d like to don a medal of sorts:

There are so many options for medals of the Virgin Mary. Designs vary widely, you can find the simplest engravings and the most elaborate decorations. This example falls in the middle – a colorful rendering of Mary is surrounded by real dried and pressed flowers, held by a simple silver chain. Check it out on Amazon here!

If you want both the crucifix and the medal, but a different design:

Consider a bracelet! There are several rosary-like bracelet designs, featuring both a crucifix and a medal with beads connecting them. Our example here features just that. This all silver option has a small crucifix and metal charms, held by a chain with distanced beads. Check it out on Amazon here!

As you can see, the act of wearing the rosary has gone through quite an evolution over the years. A Catholic tool became a prevalent faith symbol within Hispanic culture, then evolved into mainstream fashion culture. None of these uses for the rosary have phased out over the years – they are all still prevalent today. Though opinions on wearing the rosary vary, the majority of Catholics, priests included, seem to agree – so long as it is with the intention of faith and devotion by those who actively pray the Rosary, wearing your rosary as a necklace is welcome.